The Lapedo Valley and Lapedo Boy, Cross Between Neanderthal and Cro-Magnon, Archaeological Site

The Lapedo Valley is a great archaeological value of depression that is located in the Parish of Santa Eufemia, 13 kilometers from the Portuguese town of Leiria.

The valley is about 1.5 km long and a maximum depth of 100 meters. Why it happens to Sirol the river, a tributary of the River Lys, and is a valley in “cannon” because of the large slope walls, like cliffs, ripping the massive limestone. It is then a narrow canyon and deep, very steep slopes and limestone nature (which facilitates its dissolution by the water of the river), with numerous karst cavities were dug for hundreds of thousands of years by the river and other water lines. The valley is located in the northern end of the Massif Estremadura Limestone, at which point the limestone sink beneath the sediments that characterize the tectonic depression of Leiria. The valley is thus the boundary between this massive and Condeixa-Alvaiázere system. 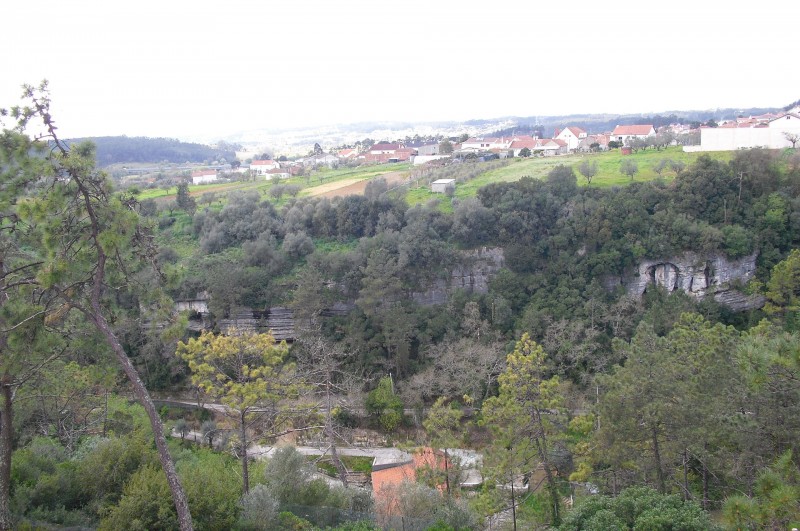 It is a great geological and biological interest valley also, since the geological formation allowed the preservation of a biological community that is the oldest in the Iberian Peninsula, the Mediterranean forest, with native species of the region as the cerquinho oak, alder, willow , ash, poplar, vine, executioner, pepper and also the strawberry tree. Fauna we can highlight some birds like chickadees, green-woodpecker, crow-black, round wing eagle, etc.

The Lapedo Valley was once called real forest of Lapedo, and in 1450 King Afonso V ordered its clearing. And if the preservation of this space is possible is because right from that century it was given due importance, being forbidden hunting and cutting of trees. Over time the site was abandoned and was even required the cultivation of land in the valley. Today the landscape remains little humanized, with only three houses dedicated to milling (mill and mills) – in fact were these conditions as unfavorable to the humanization of the site that allowed the conservation of archaeological findings found there, originate from a time when It favored valley occupation.

If today the valley of Lapedo is now known throughout the world is not for their geological value but because of its cultural value associated to the discovery of traces of human occupation in the Paleolithic, having been very important to know the way the life of man’s height and the way ran its territory over thousands of years.

By the end of the last century there was no trace of the Paleolithic in the Lis basin. Everything changed with the discoveries made in the Old Mill Haven, located in the west end of the valley on the left bank of the river. This shelter is the largest cavities Lapedo and other karst valleys of Leiria – and which have already been made archaeological discoveries, such as the valley of Curvachia, Lion or Ribeira dos Milagres. Studies show that the shelter has between 20,000 and 30,000 years.

The first cave paintings were discovered in 1998, after of a landowner in the Old Mill shelter have noticed a painting on site, which was later confirmed by Pedro Ferreira. The painting corresponded to two anthropomorphic figures, among other things, painted red, dating from the Chalcolithic or Neolithic. Then Pedro Ferreira invited two archaeologists to explore the place, giving it the most important find in the spot: the boy Lapedo. After this discovery, proceeded to the exploration of the shelter, bringing to the surface thousands of archaeological finds that there have been preserved for thousands of years.

There are about 30,000 years it is estimated that the Lagar Velho was a river beach: the sediments of this age are alluvial and among them was found large animal bones.

Unfortunately before Lapedo boy being discovered, the site suffered a earthworks carried out by this owner of the land, destroying some of the sedimentary sequence of the shelter (thus preventing a relative dating of the finds, or destroying them up). In the Old Mill Haven they found several archaeological remains: faunal remains (bones), coals, chipped lithic artefacts, pebbles, termoclastos, etc. These remains are dated from the Last Maximum Glacier.

Later, soil excavations have discovered remains dating back over 23,000 years, at about 20 square meters, which included calcined faunal remains, charcoal fragments, termoclastos and dozens of burnt bones (deer, roe deer, goat montez, wild boar, chamois, fox, aurochs, horse and rabbit), indicating that it was in that space that the animals were prepared. Three meters side turned out to the so-called “Fireplace Whittle’s” smaller than the first and almost no animal bones, indicating that served to whittle activities of animals and fur processing.

Traces the passage of hunter-gatherers by, almost 10,000 years later, they were deleted by tarterraplanagem shelter, leaving only the Hanging testimony. This is a sedimentary track 60 cm thick and included in the wall of the shelter, extending throughout the valley Lapedo. There has been a cleansing and study a section of it, which allowed us to project the paleo environment about 21,000 years: great instability and erosion episodes of great intensity, with high sedimentation rates. In this stratum also collected 32,000 faunal remains, 6000 chipped artifacts and thousands of fragments of charcoal, termoclastos and burned pebbles.

In the Abrigo do Lagar Velho was created Interpretation Centre Shelter Old Mill, aggregating all the information regarding the discovery. One of the attractions of the interpretation center, opened in early 2008, is the possibility of seeing the boy, whose face was rebuilt by the American anthropologist, Brian Pierson. It can be enjoyed also a replica of the bones found there. The original is in the National Archaeological Museum.

The valley and the site of the old mill shelter (where the boy and other archaeological finds were discovered) is a national monument classification phase and preparing the application of the same UNESCO World Heritage Site.

It is the only grave Upper Paleolithic so far discovered in the Iberian Peninsula, with 24.5 thousand years.

Lapedo boy was the name given to the fossil of a child found in 1998 in the Abrigo do Lagar Velho of Vale do Lapedo Old Mill Shelter of Lapedo Valley, in the Portuguese city of Leiria.

Boy Lapedo was discovered on November 28, 1998, the day held an expedition to the Old Mill Haven, to study some cave paintings discovered previously.1 Reconstitution of time demonstrates that the place of burial corresponded to an accumulation cone sediment, surrounded by Sirol the river and a possible exsurgência the limestone wall. To bury the child, she had been dug a small pit and burned a pine tree branch. The child was wrapped in a shroud dyed with red ocher (hence the red soil in the grave tone) and extended the pit, his back and slightly tilted to the wall of the shelter. At the neck was still collected a shell dyed ocher, which should be part of a necklace and four deer teeth in the head, which could be part of a kind of cap. The child was still buried with deer meat offerings.

The skeleton measures about 90 cm. The sex of the skeleton is unknown (despite being called “boy”). The skeleton however was not fully intact: the hand, the forearm and the left foot had been displaced, or by an animal digging in the burrow, or the act of discovery; the skull, shoulder and right arm were crushed during the excavation process of the site. The rib cage, spine, pelvis, legs, left arm and right foot, however, were intact and in its original position.

The relevance of this archaeological find, about 24,500 years, is through the fossil that have belonged to a child who might have been born by crossing a Homo neanderthalensis with Homo sapiens, which would reveal that different species of humanoids could third crossed each other and produce offspring. With the Boy Lapedo can also suggest that Neanderthals disappeared, not by fighting, but by interaction between them and the Cro-Magnons and absorption of it.

Today still continue the archaeological and anthropological investigations to the skeleton as well as discussions of their origin, if in fact resulted from the mixture of the two species, or actually belongs to one of them.

You can see a replica of the skeleton in the Old Mill Interpretation Centre, and a boy’s face reconstruction, made by the American anthropologist Brian Pierson. It is planned to build a museum of archeology in St. Augustine Convent in the city of Leiria, which house the original skeleton.