The Berlengas archipelago is a group of small islands 10 to 15 kilometers off the Portuguese coast, west of the town of Peniche in Oeste region.

Human occupation on Berlenga Grande (the only habitable island) dates back to antiquity: the islands are referred to in Ptolemy’s Geography as Λονδοβρίς (Londobris).Much later it was referred to as the island of Saturno by Roman geographers, and was visited successively by Muslims, Vikings and pirates/privateers from England and France.

In 1513, with the support of Queen Leonor, monks from the Order of São Jerónimo established a settlement on the island to offer assistance to navigation and victims of frequent shipwrecks. The monastery founded there (the Monastery of the Misericórdia da Berlenga), remained until the 16th century, when disease, lack of communication (due to constant inclement weather) and regular assaults by pirates and privateers (from England and France), forced the monks to abandon their service on the island. 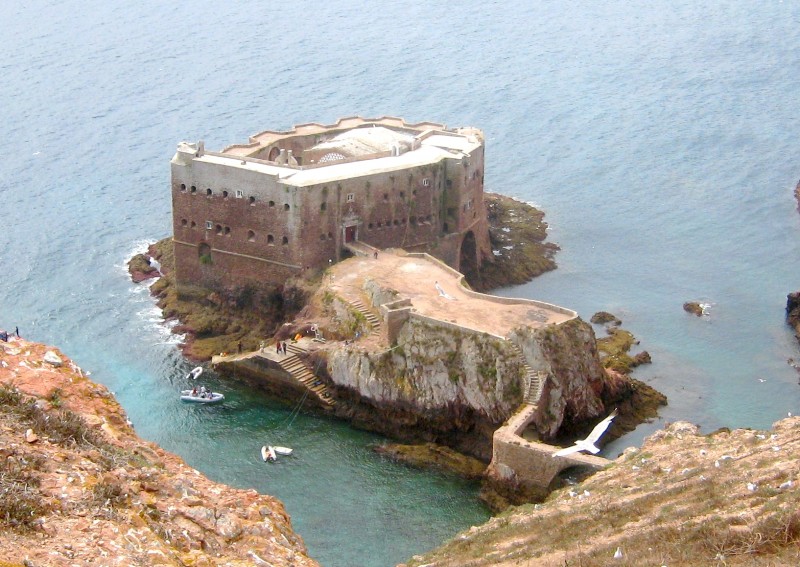 After the Portuguese Restoration War, during the reign of King John IV, the Counsel of War determined that the demolition of the monastery ruins, and the use of their rocks to build a coastal defense would help protect the coastal settlements; the Fort of São João Baptista das Berlengas was constructed from the remnants of the monastery ruins. By 1655, it had already, during its construction, resisted an assault by three Barbary coast pirates.

The island’s lighthouse (dubbed Duke of Braganza by locals) was constructed in 1841. In the 20th century a solar panel was installed in the lighthouse’s 29 metres (95 ft) column, providing a 50 kilometres (31 mi) field of vision.

Nowadays, the archipelago has no permanent population.

Berlenga Grande (Portuguese: Ilha da Berlenga) is 1500 metres per 800 metres at 85 metres high. In this small island there are beaches and several caves, its waters are very clean with barrier reefs and vibrant marine life. Part of the island was ripped off in the past, forming a separated part of the island called Ilha Velha (Old Island). In the summer, the island becomes filled with various sorts of flowers. In the larger island (Berlenga Grande) there is an ancient fort and a lighthouse. The fort is now partially converted into a resthouse. As the archipelago has been declared a reservation area due to the local fauna (sea birds, mostly), it is only visited by scientists and, in the summer, by a small number of tourists.

To the north of Berlenga Grande are uninhabitable islets, known for the existence of species of marine birds and a diverse ecosystem: the Estelas and Farilhões-Forcados Islets.

The International Coordinating Council of UNESCO’s Man and the Biosphere Programme (MAB), meeting in Dresden (Germany) from 28 June to 1 July, while adding 18 new sites, included the Berlengas to the World Network of Biosphere Reserves (WNBR): in a statement on 30 June 2011, the list of classified reserves were presented.