The Fort of Saint Michael the Archangel, also referred to as the Nazareth Morro do Forte or simply Forte da Nazaré, is located in the village, parish and county of Nazaré, Portugal.

It stands in a dominant position on the beach of Nazaré, famous and traditional fishing spot, sanctuary and resort on the Portuguese coast.

The Fort of Saint Michael the Archangel is a maritime fortification in Mannerist style, has irregular organic plant (adapted to the rocky promontory on which is based), with a bastion at each vertex. The walls in irregulasr stone set with sing at the corners, buttresses present, housing eight premises that met the Headquarters Troop functions, Command House, Storeroom and Warehouses. On the second floor, located in the Plaza de Armas. 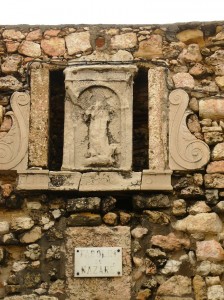 Surmounting the monumental gate, under a lintel, there is an image in bas-relief of St. Michael the Archangel, patron of the fort, and an inscription: “El Rey Dom Joam the Room – 1644″, both currently quite worn.

In the year 1901 or 1902, began a process for the expropriation of the fort, and then proceeded to the partial reconstruction of a damaged stronghold for him install the Lighthouse of Nazareth (1903), active to this day, with a range bright fifteen nautical miles, completed by a warning beep on days of dense fog.

The early defense of the place dates back to the reign of King Sebastian (1557-1578), who ruled there erect a fortification to defend the fishing village on the Mount of Flint (1577), whose port was drained by the wood of Pine d’El Rey (Pinhal de Leiria) and whose shipyards had already economically important figure at the time.

These works, however, only gain momentum during the Philippine Dynasty when King Philip II (1598-1621), around the year 1600, determined to rebuild the first fortress under the late military engineer and architect Giovanni Vicenzo plant Casale. Still under construction, a Dutch privateer entered the port of Flint and apresou a Portuguese vessel with pine wood and a ship load of Biscay carrying iron, wine and weapons (1611).

In need of repair in the early seventeenth century, the time of the War of Restoration of Portugal’s independence the Crown determined its modernization and expansion (1644), when it acquired its current conformation.

At the dawn of the twentieth century, in 1903, a lighthouse was installed in its facilities, with the help of the navigation function that stretch of coastline. 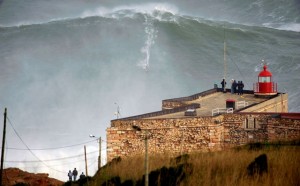 Between 1907 and 1941 were registered restoration work on the monument. 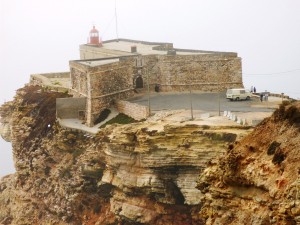 Although currently well preserved, the structure is under threat of collapse due to the advanced erosion that undermines the side of the sea.