By consolidating his rule from 1128, the young D. Afonso Henriques (1112-1185), planned to expand their domains, then limited the north by the Minho River to the southwest by the Serra da Estrela and the south by the Mondego river. To this end, from 1130, invaded several times the neighboring territory of Galicia in the north, while it remained attentive to the southern border, constantly attacked by Muslims.

In support of this Linde south, made strategically lift from the ground, a new castle between Coimbra and Santarém (1135), on top of a rocky elevation, just south of the confluence of the river Lis with the Lena River, to whose trim under the Paio Guterres command, entrusted the defense of the new frontier that there was trying to establish (cf. Brevis history Gothorum). In the village also began, and would designate its castle, called Leiria. Two years later, the town and its castle were assaulted by the Almohad Caliphate, who took advantage of an onslaught of the forces of Dom Afonso Henriques to Galicia (1137). After a fierce resistance, Palo Guterres and his men were forced to abandon their positions.

Back in the kingdom, the king organized a counter-offensive to stem the advance of the Moors, whose combined forces defeated the epic Battle of Ourique (July 25, 1139). At the end of the year, Muslims, aware that the Portuguese monarch had initiated new campaign against the King of Leon, Galicia, again attacked and conquered Leiria and its castle, whose defenders at the time, suffered heavy casualties, from your mayor , D. Paio Guterres to fall prisoner. Back at the hands of D. Afonso Henriques (1142), the monarch granted a charter to the town, determining the reconstruction and strengthening of the structure of the castle, which made erect a chapel under the invocation of Our Lady of Pena (between 1144 and 1147 ). 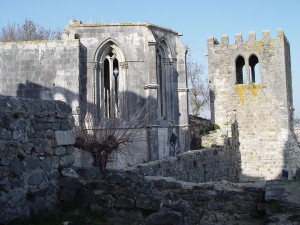 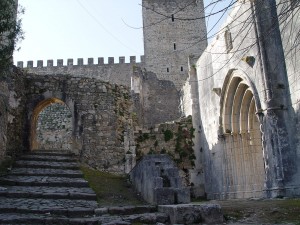 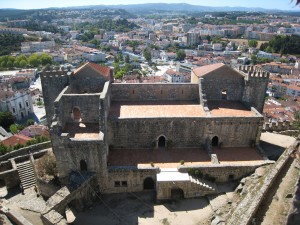 After 2 times 2 times lost and regained the castle of Leiria belong permanently to the Portuguese Province, helping the conquest of Santarém and Lisbon and therefore in building the country.

Other monarchs devoted attention to Leiria, highlighting D. Dinis (1279-1325), who lived there several times, coming to donate in July 1300, to Queen Santa Isabel, the village and its castle, chosen for creating his heir, Prince Afonso (this time the Town were located in the old seminary). Is D. Dinis that is attributed to adapt the castle to the Palace of function, reconstruction of Our Lady of Pena chapel and the start of construction of powerful Watchtower (8 May 1324), a few months before his death . This tower was completed in the reign of his successor, as epigraphic inscription on the outside.

The village has developed in such a way that it was there that took the Cortes of 1254, convened by King Afonso III, the first cortes1 which were called representatives of the nobility, clergy and people. Since then the site has a lot of time chosen for the cuts, the base on which to build what is now the Parliament. Under the reign of Ferdinand (1367-1383), when here gathered the Cortes of 1372, the town was in expansion to the banks of the river Lys. 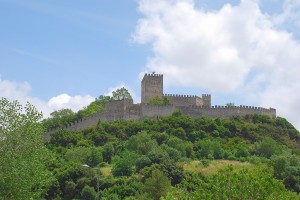 The current configuration of Leiria Castle to the sum of four major construction periods:

1 – the twelfth-century Romanesque;
2 – Gothic dionisino, the first half of the fourteenth century;
3 – Gothic joanino of the fifteenth century beginnings, and
4 – current restorer of the late nineteenth century and early twentieth century.
Some of the interventions promoted by Korrodi were later undone, considering that your project sinned by excessive romanticism, without regard to the actual profile (original) of the monument. Proof of this are the false ruins that still exist in the inner courtyard and near the port of betrayal.

The castle has an irregular polygonal plan, marked by the strength of its defensive system (walls and towers) inside which stand out the Royal Palace, the Church of Santa Maria da Pena and the Keep. Defended externally by a Barbican, the fence is enhanced by towers of square plan at regular intervals. This about ripping two doors: the Puerta del Sol in the south in what is now the Cathedral tower, and the Port of Castelinhos to the north, flanked by two towers. Surpassing to the Puerta del Sol is entered in a square where are a few buildings, the former Bishop’s Palace (now headquarters PSP) and the Chapel of St. Peter. Climbing up a ramp, along the fence of the village, one reaches the entrance to the castle, the Port Albacara, arched back round in a tower topped by merlons bevelled and torn by frestões, which served as bell tower of the Church nearby Nossa Senhora da Pena.

The castle walls are topped by merlons quadrangular, being reinforced at their most vulnerable stretch (where the slope of the land is not as marked) by a Barbican, followed by an advanced around the north and east. On the west side, ripping the call Door of Betrayal in Broken Bow. The inner stronghold, surrounded by walls belt, is arranged in a higher northwest platform, and is dominated by the castle keep.

The main castle structures can be described succinctly:

Porta da Albacara  - Door Albacara (cattle collection in Arabic), in Romanesque style, elbow as Muslim use. In the basement of the towers that stand, are some headstones with Roman inscriptions, derived from the old “civitas” of Colipo, which existed near the barrier – in much of the castle was actually built with civita stones, nothing left this to not be the stones here transladadas.

Casa da Guarda, house of the guard, set erected at the time of restoration work started in 1915, as proposed originally from Korrodi. In his porch include some columns and late-Gothic corbels originated from the ancient cloister convent of Santa Ana de Leiria (1494-c. 1917-1920), the nuns of the Order of St. Dominic.

Torre dos Sinos, The Bells Tower, access door to the primitive fortified enclosure, pentagonal and with Romanesque arches and frames containing orbiculars cruciform signs or Templars. In the thirteenth century it was adapted as a bell tower of the nearby Church of Santa Maria Pena when they were torn new windows in Gothic style. It was also called, to medieval times, as Tower Buçaqueira, which may indicate that it was the hawks would house used by royalty in their hunts.

Igreja de Santa Maria da Pena, Church of Santa Maria Pena, evolution of the first temple of Leiria, casteleira chapel of Nossa Senhora da Pena. It has a single rectangular nave, with a nave and chancel in the Gothic style, accessed laterally by a pointed portal five archivolts supported by smooth columns. The polygonal apse reveals ribbed vaults cover 7 cloths. The side panels of the chancel are torn by cracks ogivais two fires, topped by quatrefoils. Was used as a palace chapel by Dynasty Avis.No choir can even see a Roman stone Collipo dedicated to Emperor Antoninus Augustus Pius, and out the sacristy Manueline have access to the ruins.

Ruínas da Colegiada, Collegiate ruins of the canons and clerics Crosier of Leiria. Place of archaeological interest, here there courtroom, cells and dormitories, dining room, kitchen, patio, cumuas and cistern that met the religious and served the Church of Pena.

Paços Novos, Paços do Castelo, or Paços Reais, New Town Hall, Town Hall Castle or Royal Hall, with square plan, the dimensions of 33 mx 21 m. It consists of lateral towers of four floors and a central body 3. In the lower floor, there is a large lounge with three robust Gothic arches (Hall of Arches), while on the second floor two smaller halls served the day-to-day Palace (kitchen, wine cellar, bedroom). On the third floor, the royal rooms are located in the extreme, divided by the Main Hall (Hall of Hearings) that opened into a gallery or loggia of Mediterranean Gothic arches from where you can enjoy a beautiful view over the city. Two bodies that make up the flank fourth floor, which had its interior divided into at the time, luxury sanitary facilities.

Pátio Interior, Interior Square of historical and architectural interest is testimony of the monument restoration policies in the twentieth century, highlighting the options for the false ruin and by intentionally unfinished work.
Celeiros Medievais, Medieval barns, set of three datable barns of the thirteenth century, vaulted in masonry, which should be complemented with primitavamente construction wood and mud, which no longer exists.

Porta da Traição and Falsas Ruínas, Door Treason and False Ruins, a wall of cloth torn west almost completely restored in the 1930s, marks the site of the original door, which is believed to have entered the Muslims in one of the castle taken. They also observe false ruins characteristics of Monument restore options between 1930 and 1950.
Torre de Menagem, Keep, prismatic plant, rising to 17 meters high (some added during its reconstruction), is divided internally into three floors topped by a terrace and crowned by merlons quadrangular. Sent perform on the foundations of an earlier tower by D. Dinis, a Gothic epigraphic tombstone, inscribed with the royal coats of arms, points out that fact in left at the door. It was used as a royal prison since mid-fourteenth century and is active also in the second half of the eighteenth century. In the enclosure, persist ruined remains of the fifteenth century works. Currently patent is a museum nucleus inside.

Torre Sineira da Sé, The Cathedral’s Bell Tower, in Baroque style, stands on one of the ancient medieval towers of Puerta del Sol. Around 1546, we proceeded to its enlargement and reform, and took advantage of the castle door to install the house bell ringer. Later, during the episcopate of Don Miguel de Bouillon (1761-1779) acquired the present form spire featuring on the crest of this bishop. Determined with six bells made in 1800 by the master-founder John Craveiro de Faria. It is quadrangular at the top consists of a pyramid having an angel as the top vane. Once worked as a prison and was next to the police.

Portas do Norte, Doors North, or Castelinhos, mark the beginning of the Romanesque walls of Leiria involving a perimeter of about 5 hectares to the north and east. Prior to 1152, gave access to the missing parish church of Santiago and Coimbrã Bridge. Are composed of two watch chariot and Barbican on whose porch falls one of the oldest coats of Leiria county (XIV century), in which it is observed, around a castle, two pine topped by crows, symbolizing the legend Foundation Leiria by D. Afonso Henriques.

Antigo Paço Episcopal, Former Bishop’s Palace, now occupied by the PSP, is a significant example of Portuguese architecture of the seventeenth century manor, highlighting the portal and the noble window superimposed. It stands on the site of the ancient royal Paços de São Simão where resided, among others, D. Afonso III, D. Dinis, Queen Santa Isabel and Ferdinand. It was here where took place the Cortes 1254.

Igreja de São Pedro, Church of St. Peter, Romanesque Coimbra (head) and southern (portico) was built in limestone and brick, with Romanesque sculptural figurations at the level of dogs and decorative friezes of archivolts. It became the second cathedral of Leiria (c. 1548-1574) and in the nineteenth century, used as an auditorium. Also it came to be used as a barn.